As president of The Toronto Star Martin Goodman always felt that one of the duties of the newspaper was to try and unify the country. By addressing issues that are not only local, but national as well, it can make people think about as more of a whole rather than thinking only of themselves. Martin Goodman was very proud to be Canadian, which made him all more determined to promote national unity. National visions, symbols and heroes, such as Terry Fox, are a couple of things that he felt could aid in making people feel more a part of their country. By using the voice of the newspaper to stress national unity, more issues about bringing the country together can be reported on instead of the usual violence and conflict that seems to attract people. With this idea in mind Martin Goodman said, “I can not believe that ordinary Canadians want to see this society ripped apart, to make the whole of something less than the sum of its parts.”[1] This is a perfect example of how a society needs to have common bonds or links so that people feel as though they are a part of something. Martin Goodman understood this very well. He understood that if people were not educated on the issues, or felt that they were not linked to the country in some way, that national unity was not possible. Martin Goodman’s impact on raising awareness about national unity was so great that he received an Order of Canada. The Order of Canada is one if the highest Canadian honours, and a perfect example of how much he influenced the Canadian people, through the newspaper, about being connected to their country.

With the newspaper as his advocate, Martin Goodman not only was able to promote national unity, but was able to indirectly influence public opinion. Media outlets can have such a large impact on people, but it all depends on the information that is being subjected to the reader. This gives the media a very large responsibility. They become responsible for the issues that people will be concerned about. Martin Goodman saw what the public would and would not react to. He saw that highlighting certain issues in the newspaper would draw the public’s attention to them.[2] Also by strategically planning where to place articles it allowed the newspaper to influence people about issues that were seen as most important. At the time Martin Goodman was president he said, “The paper is not as relevant, on a daily basis, as it needs to be.”[3] Martin Goodman knew that even though the newspaper did have a large influence on public opinion, it was slowly disintegrating and newspapers needed to become and even more effective way of impacting people. Martin Goodman was a very intelligent man and could easily decipher what the public wanted. This is what made him such an excellent president of The Toronto Star.

The media’s impact on society has always been immense. It has the ability to influence in both positive and negative ways. With technology starting to dominate, even in the early 1980’s,  Martin Goodman saw the changes that needed to happen for newspapers to stay in competition with the media.[4] Daily papers needed writers who could write stories quickly, so that by the time newspapers went to press the information was still fresh news to people and up to date with the media, such as television. “Newspapers are generally weak in their ability to cover complicated economic and financial stories.”[5] Martin Goodman said.  Newspapers needed to change so that they could still influence readers. Martin Goodman understood very well how newspapers had to adapt to the growing development of technology. He saw that the newspaper could not impact people if it could not compete with other media outlets.

In spite of Martin Goodman’s sense of responsibility to , Canadians, and the media, and while he took his position in a management role, he always saw himself first and foremost as a reporter, as can be seen on his headstone. This headstone, that he chose himself, simply says “Martin Goodman 1935-1981, Reporter.” To mark ’s 150th Birthday, The Toronto Star gave the city a trail named for Martin Goodman, to commemorate his all too short life. Martin Goodman himself said, “I’ve lived a full 46 years, and I’d be happy to live another 46.”[6] His absence at The Star can still be felt today. With the laying off of 140 Toronto Star employees in 2008, veteran Star sports reporter Dave Perkins said, “We sure could use Marty at The Star today!”[7] Martin Goodman’s legacy will surely be felt for generations to come. His impact on Canadian society is easily recognizable through the love he had for and national unity, his influence on public opinion, and his ideas on the media. He was a greatly admired man and his ideas and dedication to making a better place will never be forgotten. 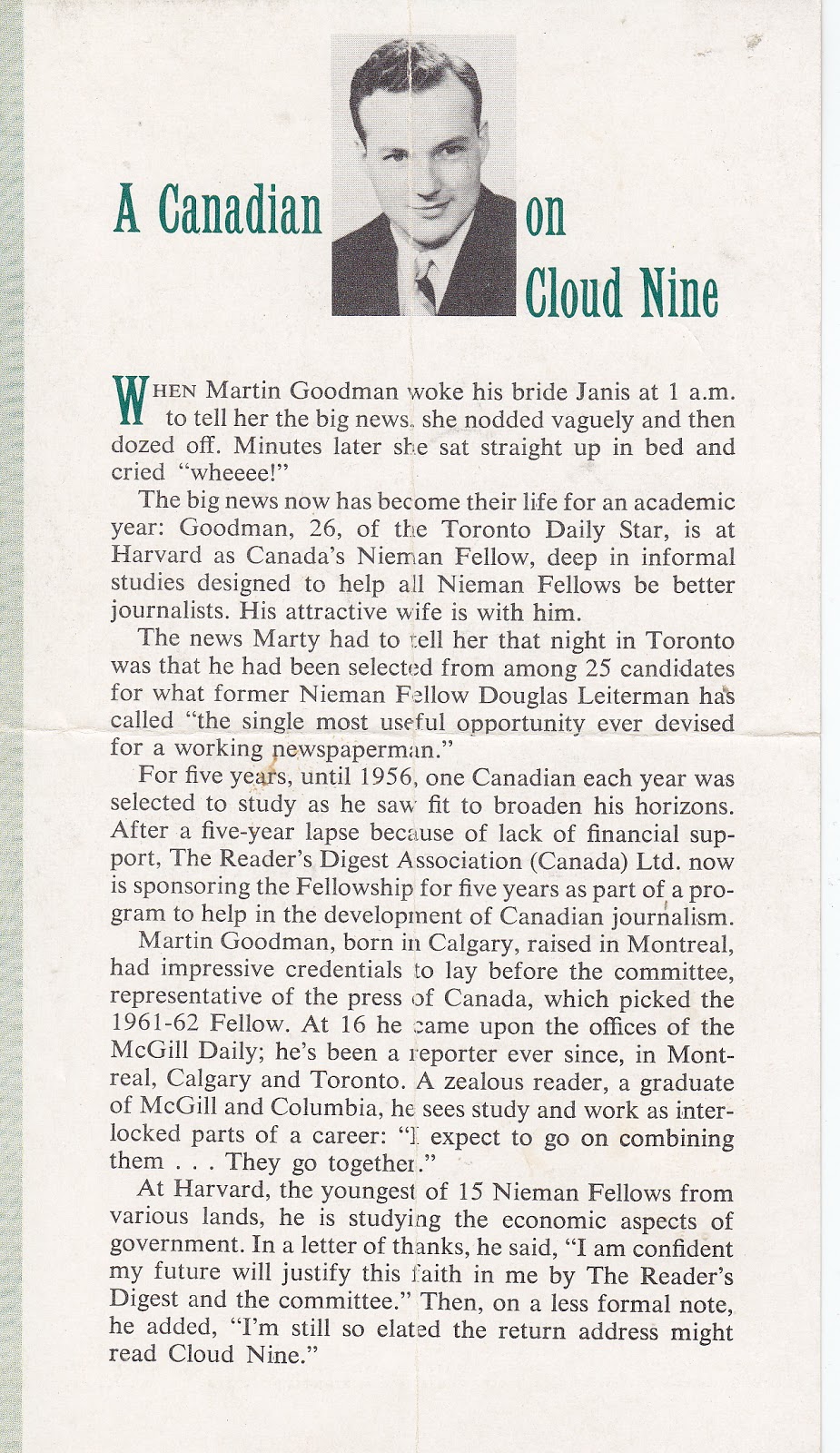 Watch the CJF Awards virtual ceremony June 9 2021 when Pacinthe Mattar will be honoured as the recipient of the Martin Wise Goodman Canadian Nieman Fellowship 2021-2022
https://cjf-fjc.ca/awards/2021-cjf-awards

"Spending a Nieman year at Harvard must be the best single thing that could happen to a newspaperman."
-Martin Goodman, January 1962-